Students Who Plan to Succeed Put In The Hours 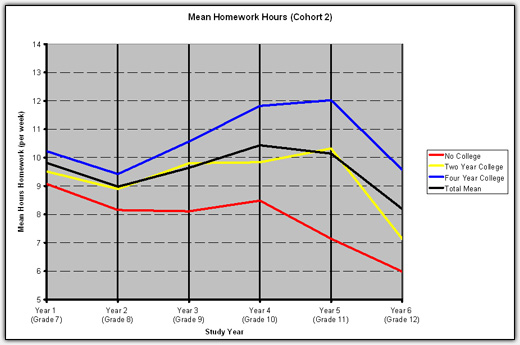 As middle and high school students begin another semester of school this fall, the homework is no doubt piling up.  But how much time are students investing in homework overall, and what impact does this have on their future?  Data from the Longitudinal Study of American Youth conducted in the early 1990s suggests that homework is a major part of the puzzle when examining the link between how students spend their time in school and their plans once they graduate.

From 1987-1993, LSAY surveyed a cohort of 3,116 students from across the country twice yearly over a period that covered their years in junior high and high school.  Among other things, we asked them to estimate for every course they took the number of hours they spent per week on homework.  Adding these figures up, we were able to determine a mean number of total hours per week the students spent doing their homework.  From there, we were able to break the figures down by what the students told us their educational plans were after high school into three categories: no college, two year/community college, and four year college or university.  We found that students planning on going to a four year college consistently averaged from half an hour to two hours above the group as a whole, while those students who had no college plans performed anywhere from one to three hours below average (the community college group, meanwhile, stayed generally on par with the total mean, usually dipping no more than a half hour above or below the average).

Additionally, we saw in most groups of students a tendency to steadily increase homework time throughout the high school years up until their senior year, when homework time slipped considerably, presumably due to the wealth of distractions and lack of academic pressure at the end of high school commonly referred to as “senioritis” (Upon reviewing these figures, study director Professor Jon Miller laughed a bit, saying “well, at least we can tell they were being honest with us”).

Now, over a decade later, LSAY has been hard at work conducting a follow-up survey, continuing to chart the educational and life trends of the class of 1993 as they complete their schooling, enter the workforce, and even begin to send their own children off to school.