Eyes on the News: Exploring the Role of Media in Political Socialization 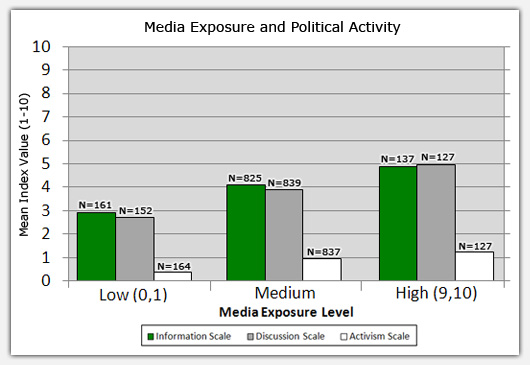 Does watching the evening news or taking a glance at the day’s headlines make us better citizens growing up? Using the information gathered from students in the Longitudinal Study of American Youth, we were able to gain some insight into the answer, but getting there is more complex than it may seem.

While the survey collected a number of questions relating to political activities as well as media intake and exposure, it is impossible for any one question to fully capture the nature of either of these variables accurately. Because of this, researchers must devise through analytical means measures of what are known as latent variables—those factors that cannot be directly observed, but must rather be surmised from a series of smaller questions. Using a process known as confirmatory factor analysis, it is possible to take a series of survey items and approximate the weight they hold in measuring a latent variable, and these values can in turn be used to construct a simple index measure of a latent variable.

In the case above, four separate indices have been developed, using data collected from high school juniors in 1988 and 1989: media exposure (reading newspapers, watching news programming), political information (how well informed respondents feel regarding specific issues), political discussion (frequency of talking about issues with family and friends), political activism (extent to which respondents take part in the political process). The graph above represents the mean values of the three political activity indices for respondents scoring at the extreme low (0 or 1) and high (9 or 10) of the media exposure scale alongside the vast majority of respondents scoring somewhere in the middle.

Though the graph does indeed indicate an increase in all three measures of political activity with a corresponding increase in media exposure, this is only the beginning of what we can discern from these results. One thing that is immediately apparent, for example, is that the three measures vary somewhat in their overall mean values, especially looking at activism compared with information and discussion. While the scales are not directly comparable to one another, the overall low activism values do indicate that the variables included in the activism index have far fewer positive responses among respondents overall (a trend possibly explained by the fact that many high school juniors are not yet of voting age and thus have less interest in direct political activity than in discussing and keeping up with current events). Furthermore, while the values differ, they are more or less centrally focused, with a particular lack of any mean index values above 5. This indicates that while media exposure does play some role, it is only one part of the puzzle in the variation in political activity. Finally, there is what the graph leaves unsaid—factors such as causality (is media making people more active, or do activists by nature pay attention to media), and the possibility that political activities are interrelated (information leading to discussion leading to activism, or any combination thereof). Nevertheless, these initial observations indicate that there is something worth studying, and begin to shed some light on an important political question.