It is a presidential election year in the United States. Many new issues have arisen in this election, but many issues are the same, ones that have also been mulled over for decades. Other issues are resurfacing from previous years. In the early 1990s, the students who participated in the Longitudinal Study of American Youth (LSAY) were asked if by the age of 40 they would like to be a regular voter. Over 84 percent of participants said they would like to vote regularly. Although the LSAY participants are not quite 40, many may be involved in the current election process. 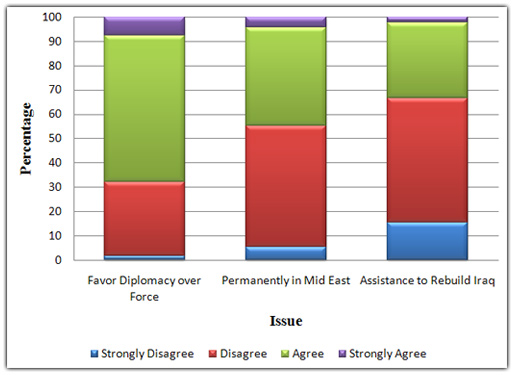 Figure 1 includes questions about the Persian Gulf War of the early 1990s. These questions were asked only of Cohort One, the graduating class of 1990. Regarding the Gulf War, participants were asked if they strongly agreed, agreed, disagreed, or strongly disagreed with the following three statements: the United States should favor diplomacy over military force; the United States must have a permanent military presence in the Middle-East; the United States should provide assistance to rebuild Iraq. Although it was a different time and a different situation, many of the same questions are asked of the presidential candidates today.

During the early 1990s, LSAY participants highly favored greater use of diplomacy over military force. They were overall against a permanent military force in the Mid-East and they tended to be overwhelmingly against funding the rebuilding of Iraq. The Iraq War of today has many different aspects to it than the Persian Gulf War, but many questions about both military actions remain the same.

The economy has consistently been an important issue in nearly every election. Fears of a recession loom over the nation today and many people are worried about their financial situations and that of the nation overall. 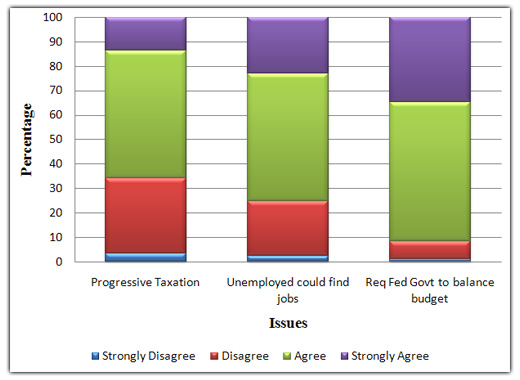 Before the 1992 elections the LSAY asked its participants several questions concerning the economy in a similar format to those asked about the Gulf War. Most participants believed in progressive taxation when the rich are taxed a higher percentage than the poor (see figure 2). Most LSAY participants also believed, however, that those who were unemployed could actually find jobs. And finally, an overwhelming majority of Cohort Two, the graduating class of 1993, agreed that the federal government should be required to balance the national budget. Less than nine percent disagreed with the statement. This question was asked only of Cohort Two.

In the early 1990s, some of the main topics for discussion were the same that arise in the current election. The current situation of the United States, although similar, has many differences than in the 1990s. It is very possible that many LSAY participants have new outlooks on life and politics.